An ongoing series of workshops is bringing fleets regulated under the Energy Policy Act of 1992 (EPAct) together with Clean Cities stakeholders and fuel providers to form and strengthen regional partnerships and initiate projects that will deploy more alternative fuel infrastructure. These efforts are helping fleets meet their alternative fuel vehicle (AFV)-acquisition requirements while replacing greater amounts of petroleum use with alternative fuels.

"The workshops are very worthwhile," says Steve Walk, director of project development for Protec Fuel Management, which markets and trades ethanol and biodiesel products and has participated in three workshops to date. "Clean Cities, fleets, and fuel providers all benefit." 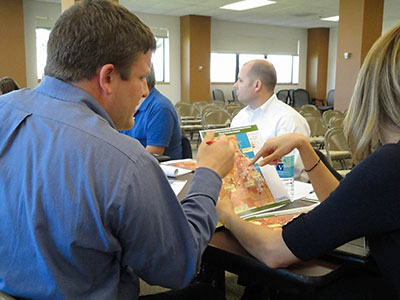 "A goal of the workshops is to help regulated fleets, Clean Cities stakeholders, and fuel providers understand each other's needs and fully use each other's resources," says Kellie Walsh, a transportation consultant who leads the workshops. "The participants discover that, if fueling infrastructure is shared, the pooled demand enables fuel providers to install stations at little or no cost to the fleets because the providers profit from the higher fuel volumes sold."

The initial workshop locations listed in the chart on the next page were chosen for their proximity to target fleets with substantial alternative fuel demand, and interest in the workshops has been high. Some of the events have drawn as many as 75 attendees. "At one event, we had to turn people away at the doors," says Walsh. Attendees represent a wide range of interests, including federal, state, county, and city agencies; fuel providers (both as fuel suppliers and as regulated fleets such as utilities); nonprofit organizations; universities; airports; branches of the U.S. military; school districts; and various private companies.

"The workshop was a great opportunity to share alternative fuel experiences with fuel vendors and other fleets," says Rick Longobart, who attended the San Diego workshop as the fleet services superintendent for the City of Inglewood (and is now the facilities and fleet manager for the City of Santa Ana). "Networking is essential to keeping alternative fuel deployment efforts moving forward."

Each workshop has several sessions. First, NREL presents information about EPAct and other statutory and regulatory requirements and Clean Cities resources, and presents its analyses of regulated fleets. Then, fuel providers present about their fuels and the criteria they use to site alternative fuel infrastructure. After a working lunch, attendees break into small groups based on geographic location to discuss specific vehicle and fuel opportunities in their areas.

Key to the breakout sessions are tools NREL developed using the Alternative Fuels and Advanced Vehicles Data Center (AFDC) to map attributes such as the location of existing alternative fuel stations, AFV density in the public fleet, and the location of federal vehicles with alternative fuel waivers.* The breakout groups are able to see clearly how individual fleets or fleet partnerships can best use fueling

"I didn't even know about the AFDC before the San Diego workshop, so it was great to learn about it and all the powerful tools that are available," says Theresa Bagg, a transportation services analyst at the University of California, San Diego. "It was also valuable to meet people and learn what fuel providers, other fleets, and the South Coast Air Quality Management District are doing and the challenges they are facing."

The breakout sessions have already led to the initiation of partnerships and projects. For example, in Virginia, the City of Chesapeake has been negotiating to sell some of its fueling sites to a private fuel retailer. During the breakout session at the Williamsburg workshop, representatives of other fleets near Chesapeake said they would use the fueling sites if E85 (85% ethanol and 15% gasoline) and B20 (20% biodiesel and 80% petroleum diesel) were available, and the prospect of guaranteed fuel sales interested the retailer greatly. This workshop also bolstered a project to bring E85 to the Norfolk Navy Base by exposing the fueling station developer to local fleet demand for E85.

At the Denver workshop, a state fleet entered into discussions with other government fleets to build demand for installing B20 pumps at state-owned diesel stations. At the Dallas workshop, fleet representatives from the City of San Marcos, the Texas Commission on Environmental Quality, and the Texas Parks and Wildlife Department met to discuss sharing fuel resources. At the Miami workshop, the Florida Gold Coast Clean Cities coalition reached out to EPAct-regulated federal fleets that had waiver requests rejected, helping them identify existing E85 fueling locations for their flexible fuel vehicles.

Additional workshops are planned for 2010 including two focused on fuel retailers. Information is posted on the EPAct website and host Clean Cities coalition websites listed in the box below. For areas not covered by the workshops, a toolkit is being produced to help interested parties run their own workshops.